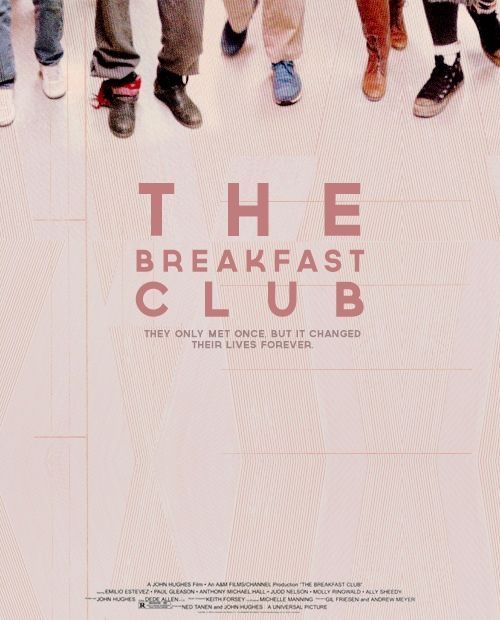 I devoured Molly Ringwald’s beautifully argued essay in The New Yorker, ‘What About The Breakfast Club?’, relating to her role in the 1980’s film. That film formed a pivotal moment in my adolescence and only last week, I found myself recommending it to a teenager I know, as a film that all people absolutely must see. Part of the cinematic canon, so to speak. Such was its impact on my teenage years, that Molly Ringwald (who, for years, to the consciousness of most, had lapsed from the limelight) remains an idol and someone whom I emulated, to the extent that my peers and I performed the confessional scene from the film in our drama exam, and fought over who would play ‘Claire’. In the end, my local contemporary Julie Huggins snagged that accolade, owing to her strawberry-blonde hair, which resembled Ringwald’s ‘Cherry’. I can still recite great swathes of the dialogue from the film and considered director John Hughes, also responsible for ‘Pretty in Pink’ and ”Sixteen Candles,’ a genius, with near-perfect recall of the teenage angst that afflicted us.

Cue line from the film: ‘When you grow up, your heart dies.’ So cautionary was this sentiment to my young heart and mind, that it seared in memory. I was not going to become that kind of adult, that kind of parent. Nit-picking but distant; demanding of academic and sporting excellence, preparing packed lunches of ‘PBJ with the crusts cut off’. Yet when asked what her parents do to her, Ally Sheedy’s character replies: ‘They ignore me.’ encapsulating the awful truth; that parents of teens, when the gulf widens between us and our offspring, retreat, somewhat wounded, into our own pointless middle age. Don’t you forget about me.

Ringwald illuminates how various scenes in the film seem inappropriate, when positioned against the #MeToo movement, of how toe-curlingly awkward it is to watch this film with your own kids. I can attest to this, having watched it with mine, I found myself forming an inadvertent  furrowed brow: I don’t recall it being quite this risqué  I definitely did, aged 13 and circa 1986, when it would have hit VHS video to be watched and re-watched at home, gloss over the sexual overtones, the drug use and the swearing. I felt little empathy with the adult characters; Mr Vernon and his ‘Barry Manilow suit’ and Carl the janitor’s creepy, voyeristic tendencies. When holding a mirror up to my adolescence and to the culture I absorbed, I see Ringwald is right. So much of it was tinged with what would now be considered inappropriate. There’s a systematic unravelling of everything I grew up to think of as ‘normal’.

I’ve written before about generational feminism; the extent to which my 16 year old daughter and I may hold the same feminist doctrines, but how the lens from which we look will differ, according to our societal and cultural references. What is her equivalent to ‘The Breakfast Club’? Who is the John Hughes/Molly Ringwald of her generation? How will she reflect, when she is 44, on the films which shaped her consciousness? In this seismic moment of gender politics, will girls not still be drawn to the references that best reflect their own experience? ‘The Breakfast Club’, with its setting in a Chicago high school, did not so closely resemble the life I led as a teen, not least because I attended an all-girl’s school in rural Sussex. We wore bottle green school uniforms, and read about what happened in other people’s lives. But the heady prospect of girls and boys in co-education presented itself through American cinema; prom nights and the backseat of Daddy’s car. In reality, although Brits have adopted the prom night protocol, evidenced by reams of proud, sparkling photos on Facebook each June, we do not do it with the American panache that was captured in the Hughes’ films. It was teenage world for the taking.

As my generation’s cultural lynch pins are removed and examined, there’s a sense that ground shifts again and I turn inward wondering why growing up with misogyny did not affect me more negatively, or become a preoccupation until I was older. I realise it had seeped into me and was the standard, and even as I look back I conclude; well, at least I knew where I stood. My expectations were met. We survived in a man’s world and that was fine, it made us wily. I don’t even recall, as I was at University in the mid-1990’s, that my friends and I ever questioned this status quo or railed against it. It is this that makes me shame-faced now, and I suspect was part of the impetus provoking Ringwald to pen her retrospective essay. Does not knowing any different make it OK? As she says, with a resigned tone, ‘Erasing history is a dangerous road when it comes to art…’ Although the films of my youth may now seem tawdry and misguided, they were to me the steady hand over the slippery path of teenage hood.